Thank you for your patience while we retrieve your images.

Neil and Jennys Blessing of Marriage, Queens Chapel London.
The Chapel was designed by Inigo Jones and built between 1623 to 1625. Recently the body of Queen Elizabeth The Queen Mother lay at the Queen’s Chapel for several days during the preparations for her lying-in-state in Westminster Hall before her ceremonial funeral. 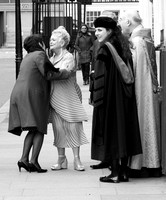